Other educational and social research is possible

Educational and social research has travelled along paths that do not seem to have advanced very far in their need to generate transformations in the areas in which they operate, often taking well-hackneyed tracks, if not closed ones, or in sterile debates insofar as they only point to programmatic and protocolary issues. Political and social circumstances, on the other hand, always seem to lead us to place ourselves in the field of instrumentalisation, opportunism and standardisation. This situation is often accompanied by submission to hegemonic positivist models, which can be more easily controlled from political systems and by the market. We can say that a procedural and protocolary logic, with little interest in questions of meaning that affect ontological, epistemological, methodological, and ethical positions, subject us.

Faced with this situation, REUNI+D is committed to thinking about research from other logics that allow us to reflect on where we stand, both in the field of knowledge and in the research practice, public policy, the conception of the subject, society and relations. In recent years we have witnessed the appearance of new perspectives that are moving in other directions, or that reformulate some of the best known, generating a profound transformation, as a result of the need to reconsider the profound meaning of educational and social research.

REUNI+D is committed to thinking about research from other logics that allow us to reflect on where we stand.

In the work that we now present, “Paths and drifts for other educational and social research”, we intend to offer a complex and diverse vision of these “drifts” in research, which allow us to think about our positions from a reflection of their foundations and consequences. Drifts understood as paths that open, possibilities offered and decisions from which to advance. In this sense, we disassociate ourselves from the sterile debate on methods to propose an in-depth discussion on the three principal axes on which we articulate this work: The emerging onto-epistemologies, the methodological proposals that accompany them, and the ethical questions involved, together with the processes of evaluation, dissemination and social responsibility of the research.

The first block, subtitled “From that which cannot be separated”, consists of seven chapters aimed at highlighting the profound changes taking place as a result of a reconfiguration of the ways of understanding the social, the personal, the political, reality and the subject. Faced with a positivist epistemology, essentially extractive, we propose some of the transformations that are taking place in educational and social knowledge. Perspectives influenced by positions that advance beyond the capitalist, patriarchal and Western standardisation, which has dominated hegemonic research on the thought of modernity. These drifts are named, according to the movements they represent, as post-ontologies, post-humanisms, new materialisms, post-qualitative research, decolonial perspective, the feminist turn and the inclusive turn. Implicitly, by their very name, they contain a questioning of previous traditions intended to be transformative, but which remained anchored in institutional orthodoxy. According to these alternative perspectives, it is possible to think of other foundations to investigate that place us before another understanding of reality that we could qualify as more complex, supportive, relational, global and transforming. These alternatives consider the fundamental tensions arising in today’s society: gender, class, ethnicity, nature, technique, diversity.

Perspectives influenced by positions that advance beyond the capitalist, patriarchal and Western standardisation.

The second block, “Methodological perspectives”, presents a broad panorama of other ways of doing research, which take into account the previous foundations; therefore, they consider other subject participation, other systems of relationships, other strategies and other emerging focuses that involve different processes. In this sense, some proposals consider broader routes along with other more recent ones. However, they have in common a commitment to more democratic processes, more horizontal strategies, a more equal participation of investigated subjects, a decentralisation of the protocols in favour of more open and emerging processes. Its eight chapters follow different paths that open a range of possibilities, in some cases with more structured and established proposals, such as the socio-cultural perspective and design-based research; other focus on subjects and emerging designs, as is the case of participatory and collaborative research, arts-based research or narrative and biographical research. The rest of the chapters deal with new realities that are shaping the educational and social spheres and that involve new strategies and procedures or the rethinking of existing ones; as it is the case of ethnography in the (post)digital era, research in educational technologies or the new citizenships resulting from current socio-political conditions.

The third block, “Ethics, evaluation, dissemination and responsibility of research”, attempts to take a further step in considering research as a social, political, and moral process. The meaning of what we do to foster educational and social change, for people’s lives or the achievement of a more just, equitable, free, and supportive society, cannot be avoided. This block rethinks these questions, considering, of course, the social models that are shaping and transforming our educational and social realities. Processes from which the strategies of dissemination and assessment are not alien, in which not only our professional prestige is at stake, but fundamentally the possibility of being part of the processes of change and transformation, in which research must and can be present.

The meaning of what we do to foster educational and social change cannot be avoided.

In summary, we offer a collective work that opens a new debate in the literature in Spanish, which aims to change the focus of reflection, discussion, and action in areas as sensitive as education and social processes. A debate that allows us to see ourselves as actors in a changing world and not just as spectators of reality. 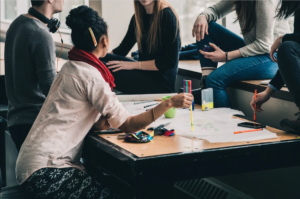