This chapter  published  in the book coordinated by Juana Mª Sancho, Fernando Hernandez, Lourdes Montero, Juan de Pablos, Jose I. Rivas and Almudena Ocaña, entitled Caminos y derivas para otra investigación educativa y social, by Editorial Octaedro(2020) , deals with the contextual and philosophical dimensions that  gaverise to  post-qualitative researchand  its relevance for educational and social research from three different spaces.  In the first of these, we report on the shift generated by post-humanism, new materialisms and new empiricisms in the new paths opened up in research. The second one raises the relationship of the affective turn and the role of the affections with the postqualitative research. The third focuses on the linguistic turn, the crisis of representation and the possibilities of writing as a research method. In this way, we recover part of the complexity of the post-qualitative movement, which has led to a shift in the way we approach our research work, our relationship with knowledge and our position with regard to teacher training. In the text we reveal  some of the ideas that this transition to the post-qualitative position hashad on our  teaching and research   work. We do not provide a set of solutions to the problems we are experiencing in educational research, but we do present some new possibilities for tackling this task . The post-human shift has given way to new forms of research, becoming a catalyst for other ways of thinking and research under a general term called post-qualitative research. This new form of positioning invites us to rethink and re-situate our own practice in relation to educational research. It implies an alteration, change or shift from the regulations that guide qualitative research practice in education. It is a sort of opening to other more problematic, inclusive and decolonial forms ofaffecting the construction of   reality that we carry out .  Assuming a commitment to a type of research that is committed to establishing another type of relationship with the different agencies that make up socio-educational realities implies questioning the onto-ethical-epistemological order that maintains the humanist perspective of research.
This new form of positioning invites us to rethink and re-situate our own practice in relation to educational research.

A purpose that has led us to search in the so-called  “post” theories (St. Pierre, 2013) for the territory of epistemic diversity that we were pursuing in order to approach our work; where diverse theoretical positions coexist but in logical coherence with a kind of scenario that requires new inventive approaches (Coleman, 2017) with which to continue adding complexity to our realities and broadening their possible readings. This is a question that becomes more necessary than ever, due, among other things, to the fact that the world in which we live can no longer be explained or justified through orthodox thinking (St. Pierre, Jackson and Mazzei, 2016), and which calls on us to rethink the meaning of the type of research that has been developed from the premises of logical empiricism (Lather and St. Pierre, 2013). 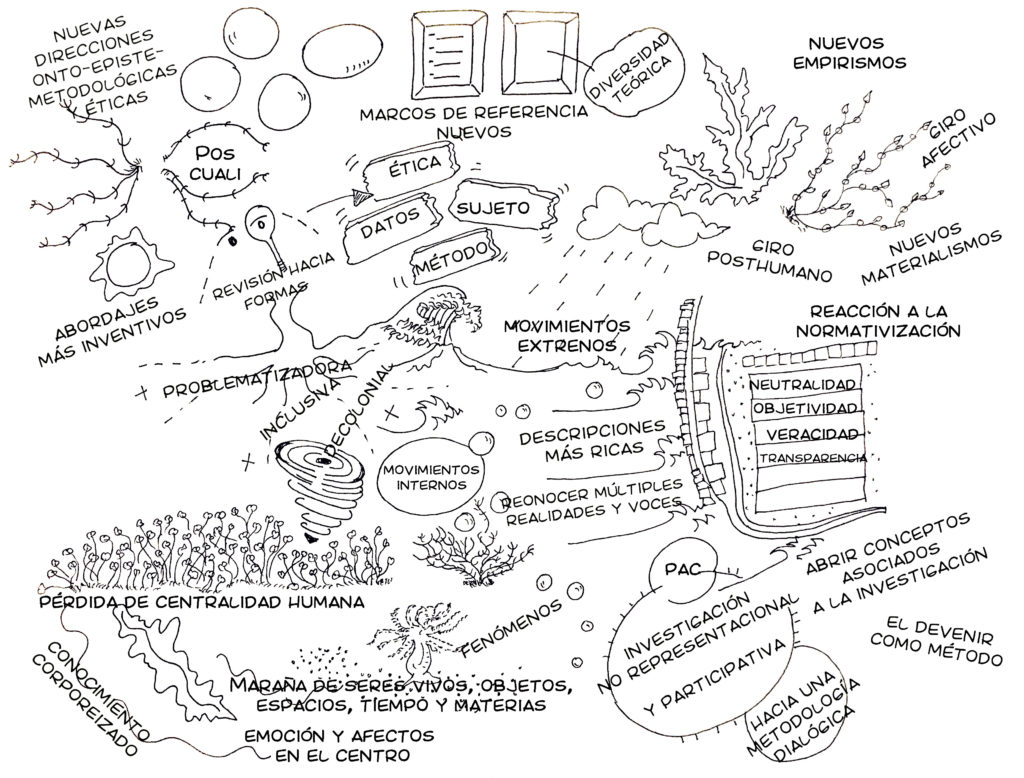 The term postqualitative includes the research that has appeared over the last two decades, rethinking the ontology and epistemology characteristic of humanist qualitative methodologies (Lather and St. Pierre, 2014), which explore and try to re-imagine new onto-epistemological and ethical directions. This position denouncesthe perpetuation of a western, white, masculine, humanist and hegemonic way of thinking (St. Pierre, 2014), making us more aware of our colonialism .And it dialogues with other perspectives and stories relegated to the margins, and which connect knowledge, power and geopolitics, bringing us closer to other kinds of epistemologies such as the indigenous ones (Wu, Eaton, Robinson-Morris, Wallace, and Han, 2018) so often turned into subalterns, and allowing to emphasize on the contrary, the complexity, porosity and performativity of the mutually constitutive human and non-human elements within our research practices. A post-qualitative position of research, always multiple and crossed by a theoretical diversity, that does not have a single face nor is articulated in a single proposal and that cannot be described in an orderly way in a research handbook.