Inclusive education and attention to diversity: an unsolved subject in the teacher training curricula in Spain

The educational reform, which began at the end of 2020 with the approval of the LOMLOE (Organic Law 3/2020, of December 29, which modifies Organic Law 2/2006, of May 3, on Education) continues its journey by addressing at the beginning of this year 2022 one of the issues that generates the greatest expectation among the educational community: the reform of the teaching profession. In accordance with the planned calendar, in the first months of the year the Ministry of Education will present a proposal that will cover, among other issues, those related to initial teacher training. Presumably, this reform will lead to a review of initial teacher training programs by universities, which will have to accommodate them to the resulting renewed framework of competences and contents.

Changes in study plans often lead to debate on the aspects in which training should place more emphasis, to guarantee the adequate professional development of future teachers: disciplinary content, digital skills, attention to diversity, gender perspective, interculturality, etc… The debate is on. The result has not always culminated in the definition of initial teacher training programs that effectively respond to the demands of the educational system, which has meant that there have been several promotions of teachers who have joined the profession without feeling properly prepared to perform some of the work tasks and, objectively, without specific training for a function to which they are called to respond. This is the case of those relating to attention to student diversity.

which has meant that there have been several promotions of teachers who have joined the profession without feeling properly prepared to perform some of the work tasks and, objectively, without specific training for a function to which they are called to respond.

Just by taking a look at the data from the latest edition of the TALIS study (Teaching and Learning International Survey, OECD, 2019) to get an idea of ​​the magnitude of the problem. The area in which Spanish teachers indicated that they had a greater training need was teaching students with special educational needs, pointed out by 27% of primary teachers and 28% of secondary school teachers (MEFP, 2019). Likewise, 18% of these teachers recognized a great training need for teaching in multicultural and multilingual environments. This lack of preparation to address diversity is certainly a cause for concern, since we find ourselves in social and school settings in which diversity is increasingly present, more visible and more recognised: according to school enrollment figures from the Ministry of Education between the 2011-2012 and 2018-2019 academic years, the number of students identified as having specific educational support needs increased by 72% in primary education (from 6.8% to 11.7%), while the percentage of foreign students stood at 10.5% in the last year (MEFP, 2020).

The TALIS study collects another piece of information that could well shed light on one of the causes of the aforementioned lack of training: the two areas in which fewer Spanish teachers reported having been trained during their university studies were teaching in environments with diverse capacities (57%) and in multicultural and multilingual settings (39%).

The above data are better understood by analyzing the curricula of the primary education teacher’s degrees that are taught in Spanish universities. The INDUCT group has carried out a review of the study plans of the 39 public universities with the degree in force during the 2020-2021 academic year (see Sánchez-Serrano, Alba-Pastor and Zubillaga, 2021). In the study, the compulsory subjects on inclusive education and attention to diversity have been identified and the corresponding syllabus have been analyzed. The results of the work show that in half of the universities (N=20; 51.3%) the future teachers only take a single compulsory subject on this topic, which translates into only 6 ECTS out of the 240 of the total, which can be described as clearly insufficient. Worse is the case of some of these institutions, although a minority (N=3; 7.7%), whose curricula do not include any specific compulsory subject on inclusive education and attention to diversity (see graph). 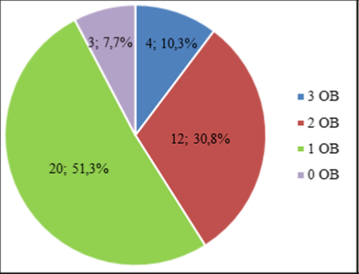 The study also delves into the approach from which the identified subjects address training in attention to diversity, based on the information provided in the syllabus. The results show the pre-eminence of subjects based on approaches of a psychopedagogical or psychological approach (64.3%) (a large part of them, besides, with a particularly traditional and categorical orientation, based on the diagnosis of the students), far ahead of those that follow other approaches more typical of the teaching role in terms of attention to diversity, such as the curricular-didactic approach (37.5%) or the one based on school improvement (37.5%).

It is hard to believe the lack of interest that educational attention to diversity has been receiving in initial teacher training curricula, especially considering that since 2006 inclusive education has been recognized as a right after the approval of the Convention on the Rights of Persons with Disabilities (CRPD, 2006).

The commitment assumed by the Spanish authorities to guarantee the right to inclusive education within the framework of the CRPD and the current 2030 Agenda (ONU, 2015) must go beyond a mere declaration of intent embodied in the LOMLOE and turn into specific actions and strategies aimed, among other things, at teachers training to provide an inclusive educational response to student diversity.

This is one of the great challenges that the reform of the teaching career must address, ensuring, in the specific case of the initial training stage, that the study plans of the different teacher training degrees incorporate specific compulsory subjects on inclusive education and attention to diversity.